All You Need to Know About Google’s December Core Update

Google’s December 2020 core update is one of the most impactful algorithm updates hitting the SERP over the years. As a powerful update, it is good to know all about it. What changes Google made? Why did some sites get outstanding ranking and place in search engines while others got lost in their ranking?

These are the main questions and if you want to know answers, follow this blog.

What is Google core update?

On December 3rd, 2020, Google announced through its official Twitter account that they are rolling out the latest Core update. Initially, the bulk of impact looks to arrive on the same date. 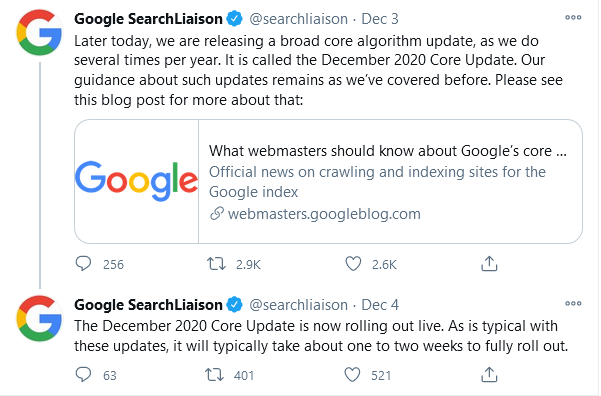 This core Google update has become the third of the year with the first update released in January 2020 and then in May 2020. Normally these core updates roll out after every few months, but this one took almost 7 months to arrive with the previous one rolled out on May 4th, 2020

Google stated via its office Twitter account, “December 2020 Core Update is now rolling outlive. As is typical with these updates, it will typically take about one to two weeks to fully roll out.”

After this core update, multiple cities seem to be affected. On December 4th, the second day of the roll-out, SERP for most of the websites reached a 9.4 volatility mark. In general, health, real estate, and Law & Government sectors are the most affected across both desktop and mobile version. On desktop research, the Travel & Finance sector has also seen high volatility rates on the first day of the roll-out, while on mobile, Jobs & Education and Pets & Animals sector.

What to do if your site ranking drop?

Unfortunately, there is no way that you can adopt to make your site rank higher again. Although, Google has provided a complete list to check out whether your website had been negatively affected or not after the Core update. This list helps you find out whether your web page is wrong or doing completely fine as a negatively impacted site does not need to have issues.

How to recover from this core update?

Google has also provided information about recovery time for websites which were negatively affected by previous updates. As a rule, a website cannot be fully recovered until the next a new core update arrives. Google says that you will notice recovery in your website only after a new core update is rolled out and there are chances that you may see slight recovery between the core updates. However, there is a chance for improvement and recovery between the updates, said John Mueller, the senior webmaster analyst at Google.