Google’s Danny Sullivan has confirmed yesterday that a core Google Update has rolled out on 5th May 2020. The update is officially known as “May 2020 Core Update.”

This is Google’s second confirmed update of 2020 so far, with the first one launching back in January. 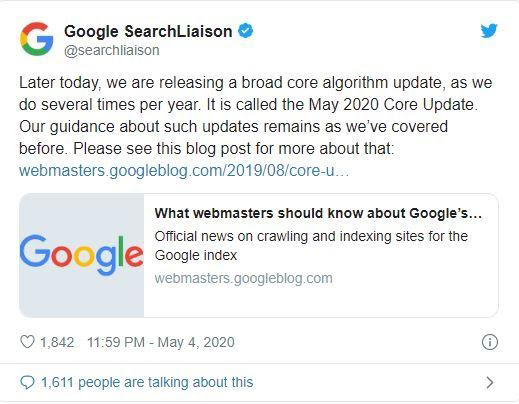 Feels like a lifetime ago considering how the world has changed between then and now. With that said, this effectively answers any questions about whether Google will pause core updates amid the coronavirus pandemic and the answer is no.

The purpose of this Core Update

Broad code updates are specially designed to produce widely noticeable effects across search results in all countries in all languages.

Then there is newly published content that didn’t exist at the time of the last update. That all must be reassessed against previously existing content. In simple words, ranking can move around a bit.

With this being the first update since the pandemic, this May update has the potential to be highly volatile.

Is this update a boon to SEO Job market?

If the May 2020 core update ends up being as potent as it has the potential, it could be a good thing for SEO. Now it is no secret that many companies are laying off staffs and pausing their services during this economic downturn. Service provided by SEOs is especially valuable anytime a new algorithm update occurs. The more volatile the update, the more valuable SEO services become.

This means that SEOs may find a rise in their demand for work. It will be interesting to see in upcoming time that how several companies allot a budget for SEO services when this May 2020 Core update rolls out completely.

What do you need to do now?

Google’s guidance regarding this update remains the same as all core updates in the past. Historically, Google has said that there is nothing to fix if the ranking of your website gets downs after an update.

Although, it is advised to website owners to make their content as best as it can be. In simple words, this means you need to make your content the most holistic resource available on the web that meets the specific query of the users.