Google has recently launched a brand new mobile-first indexing feature that can be of help to the webmasters as well as the SEOs to understand that how does Google performs indexing on their sites. Another specific information that we can gain through this feature is about whether a site was switched to the mobile-first index or not.

Mobile-first indexing: what is it?

As the name suggests, it is a mobile version of any website that becomes the initial point for Google to be included in the index. The mobile index acts as a baseline for the determination of the rankings. If you encounter monitor crawl bot traffic on your site, it might also bring an increase in the traffic from Smartphone Googlebot. The cached pages are certainly the mobile version of your page. The reason for such pages to be called the “mobile-first” is not just it has a mobile-compatible mechanism, but it means that even the desktop site can be included in the site index.

Be aware that a lack of mobile-friendly experience can have a negative impact on the site rankings. It is a fact that any site with a decent mobile experience receives a healthy boost in rankings that, too, for desktop searches.

For example, Below mentioned image represent the facts.

What is the new thing?

The newest addition to the indexing concept is that now if you go to the settings for a property, you can check on the Google bot that is indexing your site under the settings option. On top of it, you would also know that when correctly did Google switch it from desktop to smartphone crawling version.

The implication of the mobile-first indexing feature:

One of the most significant benefits of the newly-launched mobile-first indexing feature by Google is that it will assist SEO experts, developers, webmasters, and publishers to gain clarity on the time when the site was switched from desktop to the mobile-first indexing. In addition to this, it will even guide to figure out the crawling issues and how the rankings followed after the switch. The earlier indexing versions had this limitation of now showcasing the exact date when the change took place.

How to make the most of the mobile-first indexing feature?

As they say, every change is for good and so holds true for the mobile-first indexing. Be clear that the difference is very mild, and it happens just in the early testing stages. Google considers switching only those sites that seem ready and will have a minimal impact.

Similarly the example mentioned below describes the content ethically. 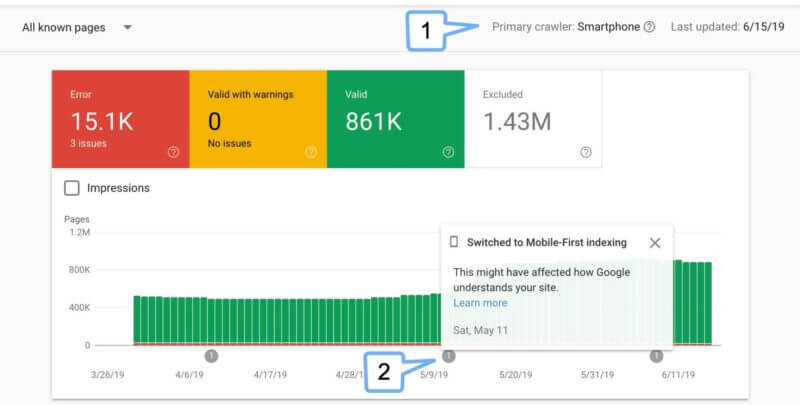 To make the most of the addition, pay attention to the responsiveness of the site. In order to do it, the optimization of the images and other page elements should be done correctly for a smooth mobile experience. Be sure that even the hidden content that is treated to save space during mobile searches will be treated equally as visible content. So, right optimization is the key to fetching the most out of this newly added indexing feature by Google.

Trusted by Our Business Partners